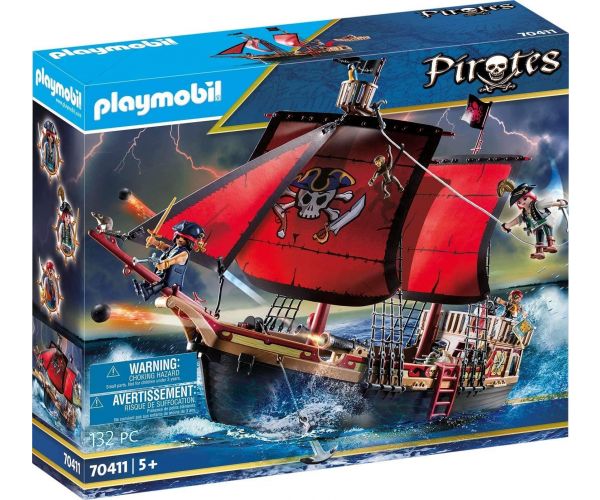 Skip to the beginning of the images gallery
Wish List

FREE DELIVERY on this item

The dangerous pirates with their Skull Pirate Ship are the terror of the seven seas. As soon as their fiery red sail with the grim skull and crossbones comes into view, all sailors become scared and bang. The cunning pirate captain and his crew are always on the lookout for the next treasure or ship to board.

With their swivelling cannons, pistols and sabres, the buccaneers plunge into every battle without fear. Watch out, you landlubbers and redcoats! The ship is floatable and can be upgraded with an RC underwater motor (9853). For more flexible trips in the children's room, the hull is equipped with wheels, so the ship can be moved effortlessly across the floor.

If you wish to return your purchase we ask that you please inform us within 30 days of receipt. We will only issue a refund if the item is unopened, unused and totally resalable condition. You will receive a full refund of the purchase price of the item plus any delivery charges you paid when you placed the order.

To cancel your contract you must notify us by email, or in writing.

Our returns address is:

In the unlikely event that you receive an item which proves to be faulty we are happy to help. However, we are unable to refund items after a period of 30 days has elapsed.

See What Our Customers Think Of Us

We use cookies to improve our site and your shopping experience. Find out more about the data we collect.