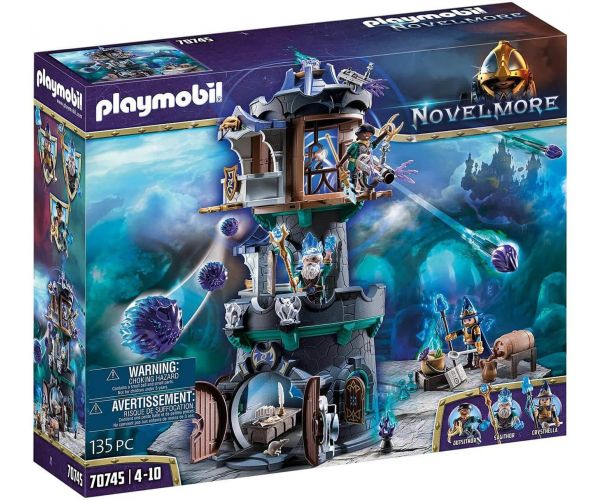 Video
Skip to the beginning of the images gallery
Wish List

FREE DELIVERY on this item

Explore the fantastic world of the powerful wizard Timithor - the Guardian of Time! In the legendary wizard tower of Violet Vale is the magic workshop of Timithor's friend and companion Sagithor. This is where spells are practised and magical potions brewed.

The mystical tower holds many secrets, even a valuable treasure lies hidden here. However, capturing the sparkling crystals is almost impossible, because the gate on the ground floor is locked by a magic lock that can only be opened by real magicians. From the tower, spellcaster Crysthella keeps an eye out for danger through the binoculars. If demons or dark wizards approach the tower, they are greeted with projectiles from the cannon.

The playset includes the Novelmore wizards Sagithor and Jutsithor and sorceress Crysthella, a wizard tower with rotating mechanism and secret hiding place as well as a firing cannon, magic cauldron, spell book, crystals and many more fantastic extras for a magical playtime.

If you wish to return your purchase we ask that you please inform us within 30 days of receipt. We will only issue a refund if the item is unopened, unused and totally resalable condition. You will receive a full refund of the purchase price of the item plus any delivery charges you paid when you placed the order.

To cancel your contract you must notify us by email, or in writing.

Our returns address is:

In the unlikely event that you receive an item which proves to be faulty we are happy to help. However, we are unable to refund items after a period of 30 days has elapsed.

See What Our Customers Think Of Us

We use cookies to improve our site and your shopping experience. Find out more about the data we collect.